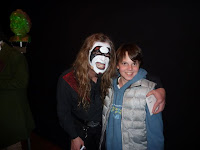 One of these great works is “Faust,” a two-part closet play that has been rewarded with great fame and respect. It is the story of renowned, but dissatisfied scholar. As he grows older and more disillusioned, Faust, greedy for knowledge and power, sells his soul to the devil in exchange for limitless knowledge and wordly pleasures. Goethe finished writing the first part of “Faust” in 1806. It was published two years later and select scenes were performed first in 1819 and in whole in the year 1829. In 1832, the year of his death, he finished part 2. In 1938 both parts were performed for the first time unabridged. (for more information, check out Wikipedia)

During my recent trip to Germany I had the great fortune to be invited to watch the latest edition to Faust media, a “Faust Rock Opera” up at the top of the Brocken deep in the Harz Mountains. My German grandmother and I boarded a well-decorated train that led to the summit. In fact, it was an old-fashioned steam train that had sincerity spelled all over it. Entertainment during the one hour trip was provided by a witchy witch and a devilish devil. For those who are unfamiliar with old Harz legends and folklore, the Brocken is a famed witch hangout. Once we arrived on top the mountain, we entered a snowy cold winter wonderland. With the bewitching wind blowing hard into our faces, we headed to safety in a building that looked the part of Faust – just as the train did too. Welcomed with some refreshments, we headed to the theater which was no more than some chairs set up in two dozen rows.

The rock opera opened with the Devil in hell singing his song of devilish madness. We then got a glimpse of Faust, an old scientist dissatisfied with life. After a failed attempt at suicide and a subsequent walk in the city, he is confronted by the devil, Mephisto. Mephisto tells Faust of a seemingly lucrative deal: Faust will serve the devil in hell in exchange for all the knowledge and worldly goods he could ask for. Although the show was part old-fashioned theater and not all singing, it was filled with powerful music and memorable songs, and topped off by a breathtaking array of lights, and splendid example of how technology is used to bring you a show.

The Rock Opera “Faust” was a well structured play with an intermission. As it is custom for the first half to have a different feel than the second half, the first part established the characters and got the rock opera going. Its role is to build up the tension and gets the attention. The second half after the intermission is slower paced and is mostly a love story. The musicians included a lead guitarist, a piano player, and a drummer who were all cleverly incorporated into the story. Fun exotic numbers filled the show with brilliance and triumph. While the music, lighting, and technological advances alone were a work of art, the actors did extremely well for bringing their characters to life. After the show I was lucky enough to briefly chat and fetch an autograph from Falko P. Illing, the actor who played Mephisto. The Rock Opera “Faust” was extremely well done, and I regret that I will not be able to see Part two.

Copyright 2011 by Robert Steven Mack (all rights reserved!)
Posted by RSGM News/Movies/Entertainment at 11:53 AM No comments:

German cinema has always been of interest to me, particularly East German cinema. I have always pondered what the filmmakers were doing behind the Iron Wall. Preparing for an upcoming trip to Germany and hoping to brush up on my not-too terribly suffering German, my mother Diana, and I stopped by the Goethe Institute in Los Angeles. I often go to pick up knowledge on German cinema, or to just get a good German video. I have seen many and have thoroughly enjoyed all that I saw. Even though I don't fully understand all of it, I manage to follow the plot well enough to enjoy the film.

I am sorry I did not write about these films sooner for there are many that I'm sure would have appealed to your interest. This time I got a charming adaptation of “Rotkaeppchen”/ “Little Red Riding Hood,” an entertaining adventure based of the famed Grimm Brothers Fairy Tale. The second movie was “The Devil and the three Golden Hairs”(1977), and a classic children’s film “Die Geschichte vom Muck”/”The Story of Muck.” The latter two were from East Germany.

In “Little Red Riding Hood: or Rotkaeppchen, our naive little heroine has five mischievous little brothers that keep her and their tidy enduring mother on their toes. Little Red Riding Hood has a chance to get away from all the mayhem when her Grandma gets sick and she is to take food and wine to her. But while traveling through the forest, she encounters the Big Bad Wolf. The Big Bad Wolf was nothing more than a puppet, the kind you would see on an old 50's children s puppet show television program. Yet, it was whole-heartedly done without the slightest worry or fear the kids would say: "Wow, like that thing is so unreal, it’s just plain cheesy." Filled with quite imaginative sets and wholesome acting, this is the nicest, most refreshing Red Riding Hood film adaptation I have seen. The new “Red Riding Hood” movie will have to be a real winner before it can compare with this! The next film “The Devil and his three Golden Hairs” based on the Grimm Fairy Tale stars Dieter Franke as the devil. I couldn’t quite make sense of the story in the beginning, but I was soon captivated by the madcap adventure of a clumsy young man Jacob who must travel to hell and get The Devils three golden hairs in order to win his beloveds hand in marriage -or at least that’s what I gathered from it. The movie was released in East German theaters and American theaters in 1977. I enjoyed it and was satisfied with the film in its whole. It is a rude, loud, slapstick adventure that anyone is sure to enjoy! At least I had a good time.

The last film “Die Geschichte vom Muck” is a cantankerous story about a mischievous lad who brings turmoil to the kingdom and its people. You have to follow closely to enjoy this charming classic that portrays East Greman cinema at its best. It’s a masterpiece that certainly is worth the time to go out and get. If you understand German or are studying German cinema - plus English undertitle is available for The Devils Hairs and the Story of Muck (although the VHS I got did not have undertitles available)- I would highly recommend these films with or without dubbing.

Shortly, I will be making a trip to Germany and hopefully have a chance to see more German films.

Copyright 2011 by Robert Steven Mack (all rights reserved!)
Posted by RSGM News/Movies/Entertainment at 6:07 PM No comments: