Afterlude to The Muppet Movie by Robert Steven Mack

After reading my article about The Muppet Movie, my mother noted the simularities between Doc's dark operations and Kaos of the 60's television series Get Smart. In fact, Mel Brooks, creator of Get Smart, played the German scientist that tried to brian-wash Kermit. Coincidence? He may have thought of this character as a sort of
Ziegfried.

Copyright 2010 by Robert Steven Mack
Posted by RSGM News/Movies/Entertainment at 2:28 PM No comments:

Labels: The Muppet Movie vs. Get Smart

With the Muppets you never know what to expect! Sometimes you will see singing vegetables, or you might see a band of crazed 70’s hippies literally sing a house down! If you ever wondered how this neurotic bunch of fluff conquered America, this movie is a must-see. Here, you will learn how Kermit and his friends started out. From his lowly start as an unknown frog in a pond, the viewer follows Kermit’s slippery road to success as a big time show biz celebrity. In the prelude to the film, we start out watching the Muppets running amock at the prescreening of their film. When all of those hyperactive Muppets finally settle down, Kermit commands them to roll the film:

One f(r)oggy day, a Hollywood talent agent comes to Kermit’s secluded swamp and shows Kermit an advertisement in the newspapers by World Wide Studios (WWS). WWS is in desperate and dire need of frogs wishing to become rich and famous. Kermit then sets out to Hollywood with his green heart set on fame, fortune, and being able to make millions of people happy. Kermit soon meets up with Fozzie Bear, a fame-seeking stand-up comedian who, instead of getting applause, gets jaws! Despite Fozzie’s ostensible lack of talent, he and Kermit strike a deal for an act. Sooner or later, they would become very close friends for the rest of their trip to Hollywood - indeed, for the rest of their lives. Not long after their acquaintance, Kermit and Fozzie encounter Doc Hopper, self-proclaimed President of Doc Hopper’s Fried Frog Legs. Gulp. This man wants Kermit to perform in his television commercials and offers him $500. Kermit, disinclined to sell his soul or legs, refuses Doc Hopper’s offer and leaves in a hurry. But, Doc does not give up easily... Kermit and Fozzie soon meet up with Gonzo, Rolf the Dog, and the lovely Miss Piggy in between several precarious encounters with Doc Hopper and his men - including one where Doc Hopper hires a German scientist to brain-wash Kermit into doing his commercials. Lucky for Kermit that Miss Piggy has a black belt in karate! Pow. After Doc’s many failures in catching Kermit, our villain hires a deadly professional frog killer to hunt poor Kermit down! When the Doc’s timid assistant learns of this, he turns on the Doc to warn Kermit and his friends. But Kermit knows of what comes next. I will only say that we have on our hands a classic show-down!

After watching this hilarious movie, I cannot help wondering if some scenes were deleted from the film. For instance, Kermit never asked Rolf the Dog to join the trip to Hollywood - Rolf just showed up. Also Miss Piggy’s brief disappearance in the film could have been better explained. Despite these jumpy edges, however, with a cast of some of the most celebrated movie icons of silver-screen history – including Steve Martin, Mel Brooks, Orson Welles, Richard Pryor, Bob Hope – as well as catchy songs, funny and witty dialog, and a good moving story The Muppet Movie is a must-see for any movie lover. Directed by James Frawley and released in 1979, this film is Muppet entertainment at its best!

Copyright 2010 by Robert Steven Mack (with special thanks to my mother Diana and father Alex for their assistance in editing)
Posted by RSGM News/Movies/Entertainment at 1:48 PM 1 comment:

Robert's Book Pick of the Week: The Lightning Thief by Rick Riordan 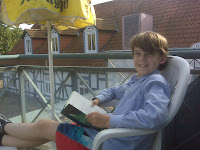 I don’t know how many people told me that Percy Jackson and the Olympians by Rick Riordan was good, but I know that it was a great many. I would have to get it sooner or later, and I finally did.

A 12-year-old boy who goes by the name Percy Jackson finds out that he is a demigod and is therefore sent to a Camp Half-Blood for demigods. Just when Percy is getting adjusted to life at Camp Half-Blood, it is discovered that Percy Jackson is the son of Poseidon: God of the Sea or one of the Big Three. He subsequently learns that the Big Three -Zeus, Poseidon, and Hades - made an oath never to have children; therefore it seems illegal for poor Percy to even be alive. With the rest of the demigod children avoiding him as much as possible, matters don’t get better when Zeus’s lightning bolt is stolen and Percy is the prime suspect. Percy along with his two friends Annabeth Chase and Grover Underwood set out on a quest to find the real culprit and to return the bolt to its rightful owner.

When I read this book I could not help but to notice the similarities between Harry Potter and Percy Jackson: A boy suddenly finding out that he is the son of a god and that gods do indeed exist, is a fairly similar idea to11-year-old Harry Potter finding out that he is a wizard and that wizards do exist. Camp Half-Blood is merely the demigod version of Hogwarts School for Wizards. In addition, the fact that Percy is quite famous from the start, makes him very equivalent to Harry. The only real difference between Harry Potter and Percy Jackson is that HP is a wizard and that PJ is a demigod. Yet, both have supernatural powers that distinguish them from ordinary mortals.
However, Percy Jackson is a lot more funnier than Harry Potter. The comical element in Percy Jackson is reminiscent to the chemistry entailed in The Chronicles of Prydian. Although more than half the comedy is in the writing, the comic moments between Percy and Annabeth reminds the astute reader of Taran and Eliwonli from The Chronicles of Prydian. Although this Percy Jackson does not have the magic of Harry Potter, nor the charm of Pydian, The Lightning Thief will give you a smile and a chuckle, as well as edge-of-the-seat suspense in this action-packed novel. I can’t wait to see the movie!

Labels: Book Review of Percy Jackson and the Olympians

Movie-Pick of the Week: Casino Royale (1967) I have heard great things about the 2006 spy film Casino Royal starring Daniel Craig. Therefore, I was surprised to find out that there was a previous film done in 1967. This adaptation of Ian Fleming’s classic James Bond novel was a parody, however, and the fact that it had a cast of Hollywood icons -including Peter Sellers, Orson Welles, Ursula Andress, David Niven, and Woody Allen - it sounded like something I might want to see. I was not even suspicious of the fact that the film was directed by five different directors! The film starts out with a group of men, including the secret agency chief M on their way to a retired James Bond’s mansion. There they request that due to a number of agent losses he would come out retirement to become an agent once more. While he thinks it over, it is mentioned that he was once madly in love with the infamous Marta Hari; and that at the time of her death the great spy was in such pity at the loss of his love that he quit being a spy and was never to return. Bond refuses even a letter from the Queen of England on account of his lost love but quickly changes his mind when chief M is killed. He then sets out to find and to help smash SMERSH, the band of hit men who are likely responsible. But first he stops at M’s widow’s castle for a fiasco. Back at the secret agency, Bond, now in command, orders that in order to conceal his identity all available agents will now be given the name James Bond. After a number of events, both comical and romantic, Bond soon meets up with his long lost daughter who was born right before her mother Marta Hari was executed. She was to go into her mothers old spy training school to collect data. I am afraid this is all I can say about that, for sooner or later you will lose track of the happenings in the film, and you will sit there bewildered and wondering what happened to James Bond? The end of the film was simply unforgettable however, for after a number of catastrophes, young Marta is kidnapped by SMERSH, who takes her to their headquarters, which they soon find out is located under Casino Royale. At the final chase scene, all of a sudden cowboys are running around in havoc, Indians are dancing, and old silent movie footage runs of policemen getting into a car, and all that inside of poor Casino Royale! I found out the reason for all the chaos on The Making of Casino Royale featured on the DVD Special Features: First, Peter Sellers left, subsequently they had to totally rewrite the script with new actors. Joanna Petit, who young Marta Hari was promised only 3 or 4 weeks on the set, she was there for 8 months, and as for the directors, they just kept coming and going. Starring David Niven as James Bond, this film took almost 2 years to make and quite obviously was out of whack, but has nevertheless a certain flair. While the film was lost on my parents who fell asleep in the middle of silverscreen chaos, I liked it! Movie Ratings on scale from 1 – 100: Robert Steven Mack: 91/100; Diana Mack: 40/100 (due to ????); Alex Mack: 55/100 (due to ????) average Mack family ratings: 62/100 Copyright 2010 by Robert Steven Mack (with special thanks to my mother Diana and father Alex for their assistance in editing)