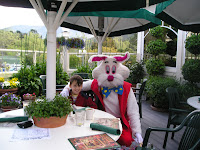 As we come to the final round of excitement of the new “Alice in Wonderland” film, I have decided that I shall review more film versions based on Lewis Carroll’s classics Alice’s Adventures in Wonderland and its timeless sequel Through the Looking Glass. Not surprisingly, this film historical treasure chest has so far been overshadowed by the 1951 animated classic film adaptation produced by Walt Disney who had great admiration for both Lewis Carroll and his two unforgettable novels.

However, Walt Disney was not the only movie maker that was enchanted by Lewis Carroll’s whimsical literature. In fact, the earliest known film version of Alice in Wonderland was produced in 1903 and was just 8 minutes long. Dozens of film, television, and stage adaptations have been created since then. Thanks to the recent release of the new film starring Johnny Depp, a variety of hitherto obscure and unknown treasures of movie history have been released on DVD.

The Alice in Wonderland Classic Film Collection - now in stores - displays fine examples of these films. It is a marvelous collection of art, entertainment, and movie magic. It starts out with a 1915 silent version, which coincidentally was the first feature length adaptation of Alice in Wonderland. The film is done with spirit and an almost amateurish style as exemplified by the stage-like look of the scene where Alice comes through the three doors covered by curtains and the stool that holds the key. The surrounding of the scene looks like the back lot of a stage. Other signs of early film making techniques are the size of the trees vis-à-vis the giant mushrooms. Alice appears to be the size of a caterpillar and no taller than a mushroom. The trees in the background are of regular size. Filming wherever they could and just adding a touch of Alice to their chosen surrounding was the simple thing to do for this picture. The pastures, the beaches, the non-professional style of this film may prove what it says on the back cover of the DVD box: “Produced long before CGI, the creatures are all costumed actors and the absence in dialogue creates a surreal, dream-like quality.” In other words, the apparently mundane surroundings as described above may be that of places where Alice has visited in the past, with a sprinkle of Wonderland added!

This early movie is strong evidence and supports the idea that anyone can produce an Alice in Wonderland film. All you really need is some costumes, a few set pieces, and a touch of imagination! This movie was directed by W. W. Yough stars Viola Savoy along with Elmo Lincoln, starring as the first Tarzan in Tarzan of the Apes in 1918. Granted, this film may seem boring and non-significant to movie goers who are not yet familiar with the silent film Tarzan, it is a must-see treasure for any film historian!
The 1915 Alice in Wonderland version is followed by two 7-minutes animated shorts from the original Walt Disney Alice in Cartoonland, produced and directed by Walt Disney in 1925. These short films, generally referred to as an Alice Comedy series, star four-year-old Virginia Davis and Margie Gray respectively in their portrayal of Alice. These two girls are acting, or “pretending” as Walt Disney called it, in front of a white screen with animation added in later. Both shorts follow the adventures of Alice and her hot-tempered, mischievous cat battling the hilarious dunderheads of Cartoonland. It is rumored that the animation in these shorts particularly the first, Rattled by Rats, inspired the evolution of Mickey Mouse and possibly other classic cartoon characters!

Next in the collection comes an animated joyful semi sequel to the original Alice in Wonderland story called Alice of Wonderland in Paris. The story follows Alice, now quite famous for her adventures in Wonderland and dreaming of the adventures that story book heroine Madeline has. With the help of a kind mouse by the name of Francoise she travels to Paris in hopes of meeting Madeline. While Alice dreams of being Madeline, it turns out Madeline dreams of being Alice! Featuring a collection of classic childhood stories, such as “Madeline and the Gipsies “ and “Many Moons” this is a witty and enchanting tale featuring French animation and the voices of Carl Reiner and Howard Morris. Who could ask for anything more! Numerous other films were made, and have yet to be made. Watching more film versions is something that I deeply look forward to doing , for many people have gone through the looking glass and down the rabbit hole to true enchantment with the books, the movies, stage and television adaptations of Alice in Wonderland and have been brought to millions of people all over the world.

It is a wonder that not more Alice Comedies have been released on a DVD collection of their own for they would be a fine addition to this collection. In any event, these comedies will bring joy to you and your family at any time!

Robert's Book Review of the Week: Andrew Clement's "A Week in the Woods"

Author Andrew Clements writes a lot of books that center on student-teacher relationships. This is again exemplified in the popular 2002 children’s novel A Week in the Woods; which I consider a note-worthy addition to his school series.

On a cold day in January, rich kid Mark Chemsley IV moves to yet another mansion, meaning that he must temporarily go to Hardy Elementary, a public school, just for the rest of the year. Having a chauffeur hold your door for you to a Rolls Royce and running around wearing custom-made clothes from expensive materials is bound to attract some attention. The impression Mark makes on his teachers is not exactly favorable either, especially the one he makes on his eccentric science teacher, Mr. Maxwell. He takes the boy to be nothing but the usual rich kid slacker that teachers cannot stand. When Mark hears of the “Week in the Woods” nature program that Mr. Maxwell himself has started years ago and that has been a school tradition ever since, Mark soon decides that it is time for a change in appearance! Mark thus goes to Walmart to buy himself some regular clothes and sets out to be rid of his old “rich boy” habits, including being alone and conquering his fear of the dark. By talking right and dressing normally, he is able to be respected by everyone in the school; everyone but Mr. Maxwell. The reason for that becomes apparent: Mark bought the most expensive and most flashy backpack in the school. Disappointed but not willing to give up earning Mr. Maxwell’s trust, Mark Robert Chemsley IV is about to embark on one of the biggest adventures in his life!

The book is split up into two parts: the first part is fast-paced and humorous whereas the second part is both a thrilling adventure story and a coming-of-age drama. Andrew Clement describes every little detail perfectly in this electrifying rags-versus-riches story that will turn pages faster than a speeding bullet!

A final word after reading Lunch Money and A Week in the Woods; Andrew Clements has done it to me again!

Labels: Book Review of Andrew Clement's "A Week in the Woods" by Robert Steven Mack

Robert's Special Movie Pick of the Week: Alice in Wonderland (1933) 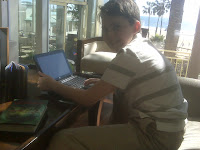 I wonder what Tim Burton’s 2010 Alice in Wonderland film adaptation will be like to watch on the silver screen? I have not yet seen it, although one thing is for certain: the new film will utilize an extensive array of visual effects.

Walt Disney’s 1951 adaptation of Lewis Carroll’s classic tale is undoubtedly the most well-known of the film versions. Although it has not received the best reviews upon its original release, it is celebrated as one of the most beloved Disneyland rides. However, due to the release of the new film, DVD companies released little-known versions of one of the most beloved children’s books. Being a classic movie buff and a film historian, I decided to take advantage of the opportunity and bought the first version that really caught my eye.

It was the all-star cast version way back from 1933 and directed by Norman McLeon. This Alice in Wonderland/Through The Looking Glass combination included screen legends such as Cary Grant, Gary Cooper, W.C. Fields, Charlie Ruggles, Sterling Holloway (who by the way voiced Cheshire Cat in the 1951 Disney version of the film!), Ford Sterling, May Robson, and Edward Everette Horton. I admit that it was funny seeing Cary Grant, one of Hollywood’s greatest leading man, in a turtle suit weeping like baby throughout his entire performance; and Gary Cooper, the great western hero from High Noon playing a bumbling White Knight who can’t even ride a horse. Nevertheless, Edward Everett Horton was perfect as the Mad Hatter, and Charlotte Henry gave a magnificent performance as Alice. There is not much to say for the plot as it was much like the books, although the film is similar to the then contemporary play by Eva Le Gallienne and Florida Friebus.

The 1933 Alice-in-Wonderland version is told with costumes, beautiful sets, and superb acting instead of the use of visual effects to make up what you see as it is done in the new Tim Burton film. My big question is whether all of those visual effects are essential to make a good movie - even a story as weird, wacky, and imaginative as Alice in Wonderland? That is exactly what I intend to find out. You will be the judge!

Whatever you may think about old movies, the 1933 version of Alice in Wonderland is a fun, witty, wacky experience for any movie-goer! 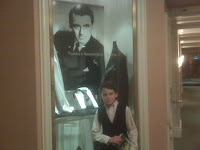